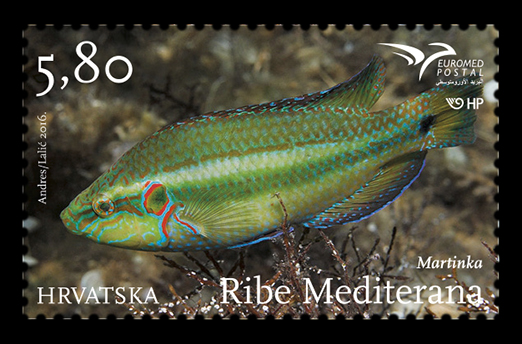 If you find in the sea a nest of a diameter up to thirty centimetres built from various sorts of sea grass and algae, it is almost sure that it was built by only ten centimetres long male of a small fish - ocellated wrasse (Symphodus ocellatus). During spring and summer his main task is to build a nest, to seduce a female and to guard eggs. Then, he will put on his “wedding clothes” and be one of the most beautiful and most diligent small fishes of the shallow bottom of the Mediterranean Sea. In order to build u large nest it is necessary to hundred times collect pieces of algae, transport them in mouth and wave into the nest which has to be kept clean and tidy every day. Females of smaller size, and not so good looking, will be coming to check the quality of the male and his nest. If he manages to satisfy them with his courting and the building quality of the nest, the female will allow him to fertilise and guard the eggs. Successful male will be taking care of eggs of several females from which - four days after fertilisation, the plankton larvae will hatch. Taking care of offspring is then over. The male has often a younger assistant helping him to chase away other, still younger males who try to take advantage of the presence of content females to fertilise them without much fatigue with building nest. However, while the male is busy building nest, guarding eggs and chasing away possible predators and rivals, even the assistant can make use of his recklessness and fertilise eggs of interested females. So it happens that in the nest of a proud father there are also eggs fertilised by many less mature males. When the mating season is over, females and males will mingle in shoals of several tens of species and will together search settlements of algae looking for tiny invertebrates on whom they feed. The species is recognisable by the blur of green, blue and sometimes black colour, with intensely red rim, positioned in the back part of the gills' cover. The blur is similar to s false eye so that this species was for that reason given the name ocellatus - derived from the Latin word ocellus meaning small eye. Small fishes live up to five years. The species is spread along the shores of the eastern Atlantic Ocean, Mediterranean Sea, Black Sea and the Sea of Azov. Ante Žuljević